Back to all posts

The Ego is the Gatekeeper, But You Have the Master Key. 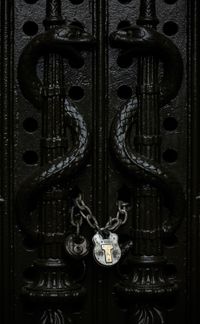 The ego has been endlessly demonized as some uncontrollable force that prevents you out of life that you want. What it actually is is a vital and necessary part of humanity that has been misused for ages. It’s belief in separation is exactly what allows you to have an individual experience and not be constantly merged in the love soup of the oneness that is the truth of you. If you didn’t have an ego, you wouldn’t be able to interface with human life. You would be blissed out and merged with The All. You would be utterly useless to your human existence.

The problem with the ego isn’t that you have one, it’s that you don’t realize that you are the one who programs it. You believe you are a victim to its tyranny and so must kill the enemy in order to be free. This is not true. The ego is like a robotic gatekeeper. It dictates what you say yes to and allow into your life. It does not have a mind of its own however, so it can’t make adjustments as you evolve and want different things.

Anything the ego is a no to, you will not be able to accomplish no matter how much you try. “Self-sabotage” is what you experience when what you want and what your ego allows are in conflict. No part of you is ever against yourself. It’s just that old programs don’t automatically change just because your needs have, and so what worked before just doesn’t work anymore. It’s not the ego’s fault. It’s literally just doing its job running the programs you’ve installed.

Sure, these programs got added when you were a child before you had agency or the ability to really choose for yourself. With that said, the truth still remains that you have absolute free will. Only you can program your own ego by what you agree to or believe in, even as a child. It isn’t your fault that in your innocence you believed or agreed with what you were told, but you are not a victim to that now. You can learn to give your ego new instructions about how to operate the automatic gate.

This is not something you can force it to do with discipline, nor can you bulldoze your way through it with will power. The ego will only lock the gate tighter if you take that approach. It literally is its only job to keep out what you have agreed is bad for you or what you know might harm your physical body. Its protection is absolute. It will protect you from yourself if it has to.

This can take the form of seemingly destructive patterns like addictions and even suicide. It protects you from what is bad, wrong, or evil about you that can threaten your connection to the group and thus threaten your survival, and it protects you from feeling pain. If the pain is so extreme that it cannot distract you with work or drugs, or other stimulus, it will try to kill you to keep you from feeling it. The ego is deadly serious about its job.

The ego is literally a robot. It has no actual feelings. Its programming language, like our computers, is binary. It cannot discern the difference of nuance or exception that is needed to make the complexity of your life work unless you program it to do so. It’s only job is to run the programs you give it. If you’re playing a video game and there is some functionality or feature you want to be in the game that would make it easier or more fun, the programmer has to change the code to allow that. Same thing with your ego.

The code your ego runs on is the language of belief. If you have a negative belief about something, even something that is ultimately good for you, your ego will protect you from the thing. It won’t let you have it. To reprogram your ego to let something new through the gate, you have to reprogram your beliefs about the thing so that they are predominantly positive. Belief doesn’t have to be absolute. It just has to lean enough one way or another to fall into a black or white/good or bad category. That’s why things that are ultimately bad for you make it through sometimes, and why things that are ultimately good for you do not.

For example, if you want more money, but you agreed with the story as a child that rich people are evil and you also believe being evil is bad, your ego says “Got it. Being evil is bad and being rich is evil so I won’t let you be rich.” No matter what you do, you won’t be able to be rich. Your ego will not let you. It’s job is to obey you without question. Beliefs also get categorized in a hierarchy. So you may think it’s bad to be rich, but you may think it’s worse to not be able to provide for your family. In that case your ego would let you expand your money situation once you have kids, but only to a point. This is why people seem to still barely “scrape by” even if they’ve increased their earning capacity.

To change something in your life, you have to examine everything you believe about the subject at hand. To do that you have to get quiet and imagine yourself having what you want. As you imagine having the thing, you will often feel a constriction or contraction somewhere in your body, and with it negative thoughts, fears or traumatic stories about the thing will come into your awareness. It is these beliefs that you will want to make note of and begin to question. You can do work like that of Byron Katie for this. “Is this thought true?” “How do I know it’s true?” “Who would I be if I didn’t think this thought?” “Who do I get to be when I do think this thought?”.

The master key of this automatic ego gate is the process of self-inquiry to face the truth of the unconscious beliefs you innocently but blindly accepted as a child. Once seen, you can make a new decision or come to a new conclusion with your now adult brain from a grown-up perspective that better serves you. Belief work is the first step and often all you need to make major changes. For particularly stubborn beliefs, there is additional emotional healing and/or somatic body work that needs to be done before it can be released and reprogrammed. I can help with that.

If there is something you’ve been wanting that you just can’t seem to make happen, I offer shadow work and inner child healing sessions that will help you uncover negative beliefs and transform them so you can have the life you truly desire. Visit the SHOP to purchase a one on one call or join the Woke Pussy Membership to access the Shadow Work Essentials Course to learn how to begin doing this work for yourself. (All members receive discounts on private sessions.)